Everyone at Genesis Biosciences is extremely saddened to hear of our dear friend and colleague Doug Manning’s passing. 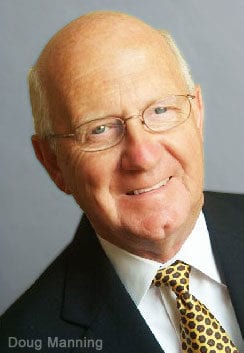 It is with a very heavy heart that I inform you that Doug Manning OBE sadly passed away in the early hours of Saturday 17th August 2019.

Doug passed away due to complications following a hernia operation in May.

My very first introduction to Doug was over the phone when I lived in Milwaukee in late 2001. He called to find out about our Biosan product for his business, WellBeing Hygiene.

That phone call was a pivotal moment in my personal development and the history of the business as we know it today. He was my first new customer after I set up Biotal Technologies.

In April 2003 I came down to Georgia to meet Doug for the first time and stayed at his lake house. Doug and his wife Anne both made me feel welcome and like family from the very beginning. I returned from that trip and announced to my wife that we needed to move to Atlanta and build the business from there.

I could not explain it to her I just had a strong feeling that my future was entwined with this man I had just met for the first time face-to-face.

We moved to Georgia in January 2004. Then in September 2007, I embarked on the acquisition of Genesis Technologies with Doug Manning by my side. He inspired me to complete the transaction and go on to merge both companies to become Genesis Biosciences. Doug at that time became a board member and has advised and been my mentor ever since.

He was a huge believer in the company from the outset and remained a loyal customer until selling his business, Wellbeing Hygiene, in December 2016.

Doug was pivotal in supporting me personally throughout the last 12 years in building Genesis Biosciences into what it has become today. He loved the company and its employees, and he believed passionately in what we do and where we are going.

He will be sadly missed and his contribution to our success will always be remembered.